The secrets behind pilgrimage are really quite unfathomable!

But before I explain the importance of this practice let us share some words from the Rasul of Allah (saw): 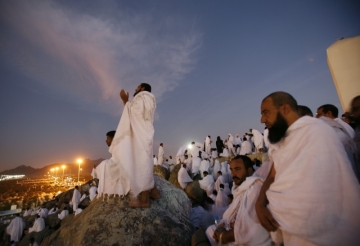 The Rasul of Allah (saw) said:

“Whoever possesses provisions and a mount that would enable him to reach the House of Allah, but does not do Hajj, it would not matter if he dies as a Jew or a Christian, because Allah says in His Book:

“Pilgrimage to the House (Kaaba) is the right of Allah (the qualities of the Names in one’s essence) upon all people who have the means to undertake it.”[1] [Tirmidhi]

A man came and asked the Rasul of Allah (saw):

“Provision and mount (i.e. enough food for the trip and a means of transportation).” [Tirmidhi]

“An Umrah is expiation for the sins committed between it and the next, and a Hajj Mabrour that is accepted will receive no other reward than Paradise.” [Muslim]

“He who visits this House (Ka'ba) (with the intention of performing Pilgrimage), abstains from intercourse, and neither speaks indecently nor acts wickedly will return (free from sin) as on the (very first day) his mother bore him!”[Muslim]

I was next to the Rasul of Allah (saw) while he was waiting at Mount Arafat when a few men from the people of Najd approached and asked, “O Rasul of Allah, what (how) is hajj (pilgrimage)?

The Rasul of Allah (saw) said:

After this he sent a man to announce this to the people. [Ibn Maja, Tirmidhi, Abi Dawud, Nasa’i]

“The Rasul of Allah (saw) prayed for forgiveness for his ummah on the evening of the day at (Mount) Arafat. He was told, “I have forgiven them all, except the oppressor, from whom I will indeed collect the due of the one whom he wronged.”

“My Rabb, if you will you can grant (the due from) paradise to the wronged and forgive the oppressor…”

No response came that evening.

The next day at Muzdalifah he repeated the supplication, and this time his prayer was accepted.”

Abbas ibn Mirdas said, “Upon this the Rasul of Allah (saw) laughed and Abu Bakr (r.a.) and Umar (r.a.) said to him, ‘May my father and mother be ransomed for you! This is not a time when you usually laugh. What made you laugh? May Allah make your years filled with laughter.’

‘The enemy of Allah, Iblis, when he heard that Allah answered my prayer and forgave my ummah, took some dust and started to scatter it on his head, uttering cries of woe and doom, and what I saw of his anguish made me laugh.’” [Sunan Ibn Majah]

As for the scientific aspect of hajj, the key lies in the phrase, “Hajj is Arafat”. For the House of Allah, Kaaba, can be visited at all times during the year, a practice that is called ‘Umrah’. Even though the benefits of Umrah are extensive, it is not equal to hajj.

What is the great secret behind hajj that the Rasul of Allah (saw) felt the need to make the warning, “He who has enough provision and a mount yet does not perform pilgrimage will die as a Jew or a Christian”?

This totally renders invalid the popular convention that pilgrimage is best done after one buys a house, a car, raises their kids, becomes a grandparent and retires”!

Once you can afford the provision and the means of transportation, pilgrimage becomes a fardh (compulsory) upon you.

Otherwise you die as a Jew or a Christian.

The Secrets of The Kaaba and Arafat

According to my observation and understanding, and the knowledge bestowed to me by Allah…

Just like the bioelectrical energy that flows through the nervous system inside the human body, there are channels or streams of negative and positive radiation under the earth.

If for instance your house or workplace or farmland is located upon one of these negative radiation channels, you will constantly suffer from sickness, setbacks, and an endless loop of adversities. At home you’ll deal with health issues, at work, financial delays and difficulties, on a farmland, trouble with crops and animals, etc…

If on the other hand they’re located on a positive channel of radiation then your home will be peaceful and tranquil, your work will prosper, your farm will flourish and you will attract good health and fortune.

The most powerful point where these positive ley lines intersect each other as though forming a central station broadcasting this supreme positive energy is beneath the Kaaba at Mecca, the extension of which is Mount Arafat!

Abdulaziz ad-Dabbagh, one of the many who have observed this reality through kashf (unveiling) mentions in his book “Al Ibriz” that there is a stream of light (nur) emanating from the Kaaba up towards the sky.

Due to the extremely strong positive energy that radiates from this point the brains of the people who go there become stimulated and activated in ways I cannot explain.

Hence the Rasul of Allah (saw) says regarding the salat that is done around the Kaaba:

“The benefit of a two rakah salat that is performed at the Kaaba is one hundred thousand times greater than a salat performed in other masjids (prayer houses, mosques) around the world.”

For, during every form of prayer and spiritual practice that is done in the vicinity of the Kaaba, the brain is constantly receiving the Light of Jalal (extremely high frequency waves) radiating from beneath the earth, thus producing extra potent brain waves, both to upload to the spirit body and to emit to its environment.

In another powerful hadith the Rasulullah (saw) says:

“Everywhere else you’re responsible only for your actions, but at the Kaaba, you are also responsible for your thoughts.”

This is because the immense strength of the energy the brain receives at the Kaaba enables it to evaluate thoughts at the level of actions and hence even the energy of one’s thoughts are uploaded to the spirit as though they are real experiences.

The Secret Of Zamzam

Now let us look at the secret of zamzam water.

Zamzam water flows through the source of positive radiation beneath the Kaaba, which acts like a generator, and eventually forms a reservoir.

Think about the Chernobyl disaster, the explosion at the Chernobyl Nuclear Power Station and how it contaminated the water. You’d never guess it’s poisonous if you were to drink it yet its full of radioactive substances that can cause serious health issues. And water can carry radiation for years on end! This is why there was huge panic in the West after the Chernobyl disaster.

Well zamzam on the other hand is the opposite example of this. Since zamzam flows through the source of positive radiation beneath the Kaaba it gives countless benefits to one who drinks it. Those who go there and drink zamzam and take wudu with it will notice its effects.

Due to the power uploaded to the brains from this radiation beneath the Kaaba interesting metaphysical experiences may take place during tawaf (circumambulating around the Kaaba). So, if the Kaaba is such an amazing energy station, a source of Nur, why is Hajj at Arafat? What’s the deal with Arafat?

We mentioned how the extension of the positive energy streams beneath the Kaaba reach the Arafat forming another important station. Now when all hundreds of thousands of people gather at Mount Arafat with the same intention, all receiving the same profound positive stream of energy directly from beneath the mountain, they naturally all start to broadcast the same meaning. The process of waiting on Mount Arafat for a period of time called wakfah is basically a collective way of tuning into the same frequency of energy with the same intention: “Forgive us Allah!”

Hundreds of thousands of brains collectively emitting the same frequency of energy carrying the same intention in the same location inevitably forms a huge magnetic cloud on and around the area of Mount Arafat!

What happens if you forget a VHS video tape on top of the VCR while it’s running? The magnetic field of the CVR will erase the data on the tape. You can call it the work of invisible hands if you like!

My point is, when you make the supplication, “O Allah, forgive me for my mistakes” you not only start to produce and emit this wave but also open your brain to receiving waves of the same meaning. Through this opening that strong magnetic field will immediately affect the brain literally erasing from the spirit all the negative data uploaded by the brain thus far!

Hence you will return from Mount Arafat like a new born, free of all sins and negative records in your database.

“The greatest sinner is one who returns from Mount Arafat and asks with doubt, ‘I wonder if my sins have been forgiven?’”

This is how definite and certain this phenomenon is!

Allah will allow whom He wishes to cleanse to go to pilgrimage, easing and enabling the way for true purification!