The Word of Unity: La ilaha illallah, comprises the foundation of the Islamic faith.

Taken literally, it means: There is no god, only Allah.

If we evaluate its meaning… La means No, ilaha means god, i.e. there is no god.

Note that, the first part of the word of unity is a denunciation: there is no god, there is no deity, after which it establishes the realityilla Allah, there is ONLY ALLAH!

It is of paramount importance that we understand how big a mistake it would be to evaluate and translate this statement according to the colloquial language spoken by the Arab population today.

Let us give an example. The Arabic statement: La rajulun illa Ali can be translated literally as: ‘There is no real man except/but Ali’ or ‘There is no man like Ali’ or ‘Among the men none are Ali’s alike’ (note that all of these statements denote there are in fact other men, but they are not like Ali). However, when the word illa is used in conjunction with the word ALLAH it does not mean ‘a god like Allah’, that is, it should not be understood as ‘there other gods, but none are like Allah’, as the very meaning denoted by the word ALLAH invalidates this supposition from the onset.

KhaanALLAhu gafurur rahiyma cannot be translated as ‘Allah was Ghafur and Rahim’as the qualities denoted by the Names of Allah cannot be subject to time; they are ever present and ever effective.

Similarly, illa Allah cannot mean except Allah, which denotes the existence of others, but must be understood as only Allah!

The compositional qualities of the One to which the word Allah refers, does not accept the existence of another, especially that beside itself.

Hence, khaane, illa and all other expressions that denote time and (other) existence must be construed appropriate to the meaning of Allah when used in conjunction with it. Otherwise, it will inevitably result in the conception of a god beyond!

Now examining the Word of Unity: There is no God, there is only Allah in light of this consideration, the first message that we are given is There is no god. Only after this definite denunciation we are told ILLA ALLAH. As explained above, because the word illa is used besides the word Allah the only correct construal of this statement can be ONLY ALLAH as opposed to except Allah or but Allah for there is no other being in existence to which Allah can be compared to or excluded from![1] Therefore, in order for the UNITY and ONENESS (non-duality) of the Islamic faith to be communicated correctly, the Word of Unity must be understood and translated accurately.

Indeed, there is only Allah, and Allah is not a god to be deified, idolized or worshipped, as per the message ‘there is no god’! In fact, Allah isn’t even a god that is beyond man and creation!

So, what is worship as opposed to servitude?

To deify or worship something necessitates the existence of a god. That is, the very act of worshipping someone or something means there is a worshipper and one that is worshipped. This leads to duality. There is a you as an individual, and then there is your god who is beyond you, and you worship this god. Clearly, this is an interaction between two parties. We may say then, that worship, in this context, refers to the collection of all the activities that are done in respect to this earthly or heavenly (exterior) God.

The phrase ABDU HU (HU’s servant) in the Kalima-i Shahadah (the Word of Witness)[2], clearly indicates that servitude is necessarily to the Absolute Essence, that is, to HU.

As for the meaning of servitude… All output by an individual, based on his creation program and natural disposition, is termed servitude. As the 56th verse of chapter Adh-Dhariyat says:

“I have created the jinn and men only so that they may serve me (by means of manifesting the qualities of my Names).”

As such, it is not possible for the creation of Allah to transgress the purpose of their existence. This verse indicates a clear verdict and its result. It is also pertinent to remember the verse:

“There is no animate creature but that He holds its forehead (brain; the programming of the brain by the name Al-Fatir).” (Quran 11:56)

In point of fact, the verse “it is You we serve” in the opening chapter al-Fatiha, exposes the meaning ‘we perform our duty by executing the necessary functions of our creational program and the purpose for which you have created us’.

“Say: ‘Everyone acts according to his own creation program (natural disposition).’” (Quran 17:84)

Servitude is the output of activity by individual manifestations, based on the creation program given to them by Al-FATIR. That is, when individuals live according to their natural disposition, they are serving the purpose of their creation.

Oblivious of submission or rebellion, all activities of all individuals can be thought of as servitude. Submission and rebellion are different types of servitude.

“The seven heavens (all creation within the seven dimensions of consciousness) and the earth (the bodies) and whatever is in them disclose (tasbih) Him (manifest the structural qualities of His names by constantly changing states). And there is not a thing that does not disclose (tasbih) by His hamd, but you do not understand their [way of, discourse, disposition] disclosure.” (Quran 17:44)

Servitude in the form of taat is the pursuit of an individual trying to know his essence and origin.

Servitude in the form of rebelliousness, on the other hand, is the collection of activities that prevent and deprive the individual from the treasures within his essence, which leads to remorse.

Therefore, while servitude refers to a lifestyle befitting one’s creational purpose, worship is the deification of a supposed god by honoring him and expecting him to grant your wishes in return.

Thus, it may be concluded that, God is worshipped, while Allah is served.

How then, should servitude to Allah be performed?

In other words, the common approach that beyond and other than this cosmos there is a God is completely false.

Allah disclosed by Muhammad (saw) is not a god!

Allah disclosed by Muhammad (saw) is AHAD (ONE).

Allah disclosed by Muhammad (saw) is the possessor of infinite meanings, which He constantly observes!

In respect of His absolute essence he is Wahid-ul Ahad (The Absolute One).

In respect of His attributes, He is Hayy (The One who gives life to the Names and manifests them), Aleem (The One who, with the quality of His knowledge, infinitely knows everything in every dimension with all its facets.), Mureed (The Possessor of Absolute Will), Qadir (The absolutely boundless One who manifests and observes His knowledge without depending on causality), Basir (The One who is constantly observing His manifestations and evaluating their outputs), Kalim (The Discloser). 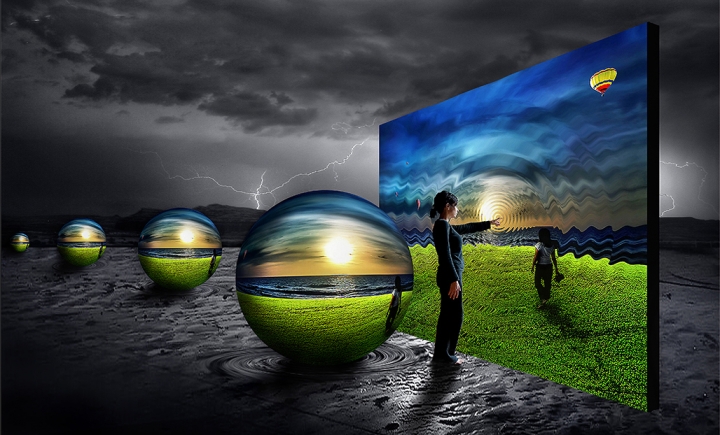 He possesses infinite meanings and qualities, which have all been expounded by Muhammad (saw).

This realm of activity referred to as the world of acts (af’al) can also be called the perceived universe as its existence depends on the sensory perception of man, angels and the jinn that reside within it. They constitute materialized manifestations of knowledge within Allah’s knowledge.

To put it another way, everything in existence is essentially localized, densified apparitions of knowledge, which, according to the enlightened ones, haven’t even sensed existence yet!

In short, nothing in the universe has an actual existence; their existence is only within the knowledge of Allah. To put it simply, they are imaginary beings!

No matter what age man lives in and what level of knowledge he has, based on his five senses, he can never perceive the actual essence (origin) of existence!

Knowledge based on the five senses will only take you to the infinite space and dimensions of the universes within the microcosm or the macrocosm. Knowledge based on the five senses will take you to the stars, the galaxies, the black holes and white holes and to other universes perhaps, but you will always pursue your life with the false belief of a god beyond…

In my book Spirit, Man, Jinn I had talked about the alien beings to which the older generations referred as jinn, and how they deceive and delude man, including depriving man from the reality of Allah by injecting false ideas and visions of religion and reality. I want to briefly touch upon this topic here also. Alien beings, or in Islamic terms, the jinn, are deficient in two areas of knowledge, and these are the areas from which they usually try to deprive their subjects. The first of these is the AHAD (oneness) quality of Allah and the second is fate, or destiny, which is the natural derivative of the Oneness of Allah.

The Unity (non-duality) aspect of the Islamic faith, that is, the system of belief explained by Muhammad (saw), is founded on the belief that there is no god to be deified and idolized (hence, there is no god-concept) and that people will inevitably face the consequences of their actions.

The Quran confirms this notion with various verses:

“And man will only accrue the results (consequences) of his own labor (his own actions).” (Quran 53:39)

“Indeed, you will be tasters of the painful punishment. And you will not be recompensed except for what you did (your own actions).” (Quran 37:38-39)

“And you will not be recompensed except for what you did (your own actions).” (Quran 36:54)

“And there are degrees for what they have done, so that they may be fully compensated for their deeds, without any injustice.” (Quran 46:19)

Since, as the above verses point out, we will be recompensed for our deeds, we should urgently study and learn about the life awaiting us after death and understand what Allah really is. For the concept of Allah is what constitutes the foundation of religion.

Let us know that, without understanding the meaning of the name Allah, we can never correctly know the essence of existence. Indeed, man and the universe can only be addressed and understood after comprehending Allah. Otherwise, we will have to make do with local evaluations and be deprived of the essence of reality.

Let us now, with this awareness, explore the encrypted words that depict Allah in chapter al-Ikhlas…

[1] More on this topic can be found in my book What Did Muhammad Read?