Perhaps we need to question the fundamentals of the topic:

A deity centered, or a Muhammad (saw) centered, understanding of religion?

Yes, I have indeed thrown yet another controversial ball into the court, but do forgive me; the fine distinction between the two implies enormous significance! In fact, failure to recognize this difference could mean the inability to rid one’s self from ‘religious savvy’ to attain the reality of the Religion!

So what is this important difference?

According to the general conception of Muslims, religion is a deity-centered belief system. That is, even though Muslims always say Allah is ‘everywhere’ or ‘free from location’, nevertheless this ‘deity-god’ whom they have named ‘Allah’ is always conceived as being somewhere in the heavens or in the upper dimensions of space somewhere! Hence, they believe in a god who is somewhere beyond. But this is a misconceived sense of duality, an apparent shirq; an act of associating partners to Allah! Almost all people with such dualistic concepts believe in a postulated god, whom they label ‘God’ or ‘Allah’, and whom they construct based on their own culture, environment and imagination.

Some people, based on their own nonsensical reasons, forbid the contemplation on the verses in the Quran in relation to this topic, and hence their ‘personal god’ becomes fixated in their brain, leaving no room for progress or development!

According to their assumptions and misconceptions, this personal god, picks a prophet for itself from among the earthlings, and recruits him as its postman-delivery man-messenger on earth! And all of this happens by way of a messenger angel it ‘sends’ down to earth! 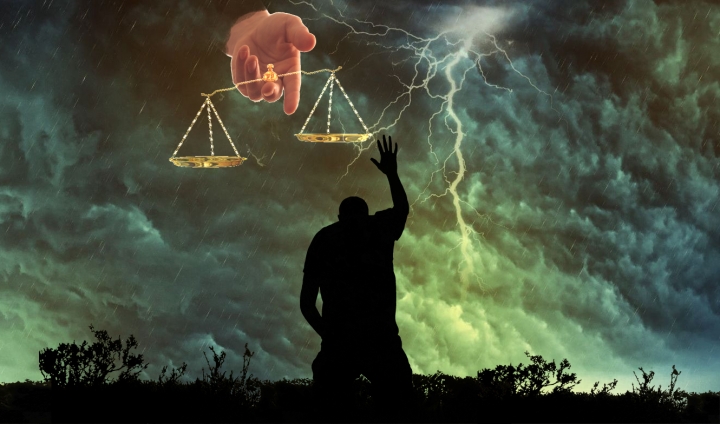 Let’s digress from the subject for an instant: Those who believe in UFOs and extraterrestrial beings claim these angels, or what people have come to accept as gods, are an advanced race from space.

Indeed, beings from space may have come, and they may still do so! Denying this possibility altogether would be nonsensical. However, to think these beings are angels or gods is an unacceptable mistake! The teachings of the Rasul of Allah (saw) attach no relevance to such things; we must understand this well.

The Antichrist (Dajjal) who will claim to be a god visiting his servants on earth will also use this deity-centered religious approach to subjugate those who believe in a deity-god to submit to him! Only a handful of people on earth will actually refuse him!

The ‘Messiah’ awaited by the Jews and Christians isn’t actually Jesus (as); it is the Dajjal! Jesus (as) is to emerge after the Dajjal comes to claim he is god. The Dajjal is going to be exterminated by Jesus (as) in person, who is going to emerge on earth at the age of 33. Then he is going to spend 7 to 11 years with the Mahdi, the final Reviver on earth, before the Agog and Magog race from North Asia invade the Middle East. After this period, Jesus (as) will live until he is 73 – a total of 40 years on earth. All of this is based on the various hadith of the Rasul of Allah (saw). Further information can be found in The Mystery of Man under the section ‘The Signs of Doomsday’.

Going back to our main topic, ‘a deity-based religion’ is essentially a materialistic one.

According to a deity-based religious view, the Quran and hadith have only literal meaning and value.

A deity-based religious view dictates that God literally has a hand!

A deity-based religious view claims God has a double pan balance scale (apparently God hasn’t yet discovered the digital and other advanced versions!).

This kind of religious understanding does not encourage contemplation, it doesn’t think to realize all of this metaphoric language could actually be used to denote certain realities to man…

As such, everything in a deity-based religious view is based on the material world. There is no room for questioning, pondering, contemplating or even thinking! There are only commands and their blind applications!

Under the name ‘Comparative Fiqh’ certain allegorical verses have been construed according to the current time and age and accepted within the scope of religion and shariah (Islamic law). Hence, the construal of Quranic verses based on that particular time and age are now taken as though they are the laws of religion.

According to a deity-centered religion salat and fasting are like debts that must be paid to god. If you fail to do so, god will send you to prison, or rather to hell!

A deity-centered religious view says: “We only obey the commands and do not think about the rest. He knows better what is what; we do not need to know anything else. If there were a need, He would have let us know. Our duty is only to obey His orders and do our worship. It is not our place to question the wisdom and the reason and ponder on the rest…”

The other very clichéd phrase of this view is: “We’re all going to die and everything is going to become apparent on Doomsday!”

As for the religious view centered on Muhammad (saw) the Rasul of Allah and the final Nabi… Far from a materialistic approach, this is the view endorsed by all of the intimates of reality, the Sufi masters, from Haji Bektashi Wali and Imam Ghazali to Abdulqadir Jilani and Sheikh Bahaaddin Naqshibandi, who when told “you seem arrogant” replied “this isn’t arrogance (kibr), it is magnificence (kibria)”… And many, many others…

Muhammad (saw) was a Hanif. He knew well the invalidity of the deity-god concept, and at the age of 39, he declared to his idolater community “there is no god or godhood, there is only Allah (La ilaha illaAllah).”

The most important point here is to recognize what ‘Allah’ references. When duly researched and examined it becomes clear that Allah is not a reference to a deity-god to be comprehended far beyond, but rather that Allah is the force, the power and presence within the essence of every unit of existence, of everything! Instead of turning to exterior and outer dimensions, individuals can attain that force and power by turning inner to the depths of their own essence, at which point they will realize their individual nonexistence and declare unity: “Only Allah exists!”

Hence, there are no angels descending from the skies but forces in the form of knowledge (Gabriel) emerging from one’s essence to his consciousness. Because the brain constantly creates forms for the raw data it receives to its database with its ‘Musawwir’ quality and outputs this to the consciousness, people perceive angels in forms.

The Rasul of Allah (saw) articulated the reality of the One whose name is Allah within his own essence. Risalah is the manifestation through revelation (wahy) of the attribute of Knowledge pertaining to this reality.

It goes from the inner to the outer, from the essence to the exterior, not the other way around and most definitely not from the skies down to the flesh-bone body on earth!

When this knowledge of reality becomes manifest in the form of disclosing the sunnatullah, the immutable constants of Allah’s system, in order to enable people to READ and apply the necessary practices of the system, it is called Nubuwwah.

Allah, in respect of his Absolute Essence (dhat) is an Absolute Unknown (ghayb) to us. We can only know Him to the extent of Rasulullah’s (saw) disclosure.

Our knowledge of Allah is not derived from our own illusion and imagination but from the teachings of the Rasul of Allah (saw), from what he has revealed to us through the Quran and hadith. We contemplate on the reference of Allah based on this knowledge but never condition and confine Him to our understanding!

“In the sight of Allah, Islam is the religion” is an expression of this truth.

Therefore, Rasulullah-centered understanding is the Religion, but a deity-centered one is only religious savvy.

The other important aspect of the Rasulullah-centered approach is about vicegerency. All units of existence are manifestations reflecting the Names and Attributes of Allah, based on the holographic reality and hadith ‘the part mirrors the whole.’

The best way to discern this is to align our thoughts such that it goes from the one towards the many (from the whole to the part)!

Once this is achieved, we will realize that all the Names and Attributes belonging to what Allah references are the forces and qualities inherent in every single person and unit of existence. Furthermore, we will know that ‘angels’ are the forces comprising the degrees of the manifestation of these qualities, emerging from the essence of man to the database of his consciousness…

Aleem, Mumeet and Haseeb, manifest as Gabriel, Azrael (the transformer) and Munkar-Nakir (the accountants) respectively!

There are no inanimate and unconscious beings in the Rasulullah-centered understanding! For every unit of existence subsists with the qualities of the Names of Allah.

Man is the only existence among all living things on earth to feel ‘sympathy and mercy’ and the capacity to observe the magnificent sunnatullah of Allah! Hence, he is the most honored among creation (ashraf-i mahluq)!

“One without sympathy deserves no sympathy”!

Rasulullah’s (saw) words in reference to vermin: “Kill all things that are harmful!” need to be comprehended and evaluated well.

Everyone who respects the lives of others has the right to live in the Rasulullah-centered conception of religion.

According to this view, every unit of existence is facilitated by its Rabb (the unique composition of Names comprising its essence) to fulfil the purpose of its creation. This may be both towards a favorable end or an unfavorable one. This is the display of absolute servitude.

In the Rasulullah-centered religion, all spiritual practices in the form of prayer, dhikr, salat and fasting etc. are done with the intention of actualizing the forces and qualities pertaining to one’s Rabb within one’s own essence rather than to please a deity-god. The phrases “for the pleasure of Allah” or “to please Allah” entail the suitability or compatibility of a situation to one’s optimal essential reality. For as a result of this, one is able to manifest a quality of his ideal essential self!

“And man will only accrue the results (consequences) of his own labor (what manifests through him; his thoughts and actions, due to the trigger system).” (Quran 53:39)

This verse is clear enough for thinking brains to comprehend the reality!

In short, a deity-god centered religion is directed towards an external God.

Whereas religion centered around the Rasul of Allah, Muhammad (saw), is for ‘humans’ who begin with faith in Allah (as disclosed by the Rasul of Allah) and then discover the various degrees of divinity and the forces and perfect qualities pertaining to them, all within their own essence.