When it comes to prayer, many of us have a preconceived idea that there is no need to pray because everything is already predetermined and predestined.

This understanding is completely incorrect!

What is important to understand is the ‘technique’ of fate; how it actually works.

Let us first consider some of the words of the Rasul of Allah (saw) in regards to this:

“Only prayer can change fate and only good deeds can extend one’s lifespan. Indeed, bad deeds and mistakes will deprive a person of provision.”[1]

“Accidents can only be prevented with prayer… Lifespan can be extended with good deeds.”[2]

“Precaution is useless when it comes to fate, but prayer can benefit both afflictions that have already come about and ones that have not yet occurred. When affliction arrives, prayer stands in opposition to it and they battle on until Doomsday.”[3]

Yes, while fate is claimed not to be subject to change in one instance, in other instances we are told prayer can change the course of fate. As contradictory as this may sound, there is in fact logic in it. 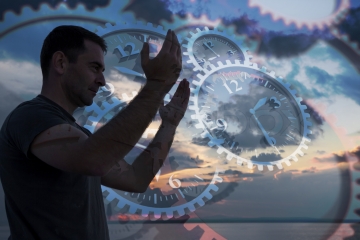 Though each person’s fate is pre-destined, prayer is an integral factor of the system of fate. With prayer, one may in fact avert a destined event and prevent an accident from taking place. Nevertheless, praying is not independent from the system of fate; one can only pray to prevent a calamity from occurring if their fate allows them to. If making a particular prayer is made possible for you, then you will make the prayer before the event occurs and thus be protected from its misfortune. In other words, you cannot change what is destined by taking caution, but you may take caution and prevent a calamity if it is destined.

Hadhrat Omar (ra) has displayed a profound example of how fate works. Upon arriving at the city of Damascus with his army he hears of a plague outbreak in the city and instructs his army to retreat. Those who have not grasped the mystery of fate question him, “O Omar, are you trying to flee from the fate (qadar) of Allah?” Omar’s (ra) answer is a lesson to all of us, “I am fleeing from the decree (qadha) of Allah to the fate (qadar) of Allah.”[4]

This is the pivotal point of the mystery of fate. Fate is absolute and definite! And man will see the results of what comes forth from him!

Let us remember the verse:

“And man will only accrue the results (consequences) of his own deeds (what manifests through him; his thoughts and actions)!”[5]

Know that the things you are able to do are the things that your fate allows you to do, and you will definitely see their results. Thus, the Rasul of Allah (saw) says: “Nothing can change the Divine decree except prayer.”[6] That is to say, the prevention of an affliction depends on your prayer. Whether or not you will be afflicted by a misfortune is directly dependent on your prayers regarding that situation. If you pray, you can prevent a misfortune from happening or enable a favorable event to take place.

Prayer is a crucial element of the system of fate. If you have the ability to pray, then do so as much as you can; the benefits you will reap are beyond fathomable in the worldly sense. Allah has made prayer the means to manifest the qualities He has ordained for His servants. Thus, it has been said ‘prayer is the weapon of the believer.’

Prayer enables the ordained favors to reach you; it is the greatest blessing.

He who uses it the most efficiently and powerfully is he who will reach the greatest divine favors.

It is the ignorant one who does not understand the system of fate, who neglects prayer and thus deprives themself of this blessing.

Let us conclude the topic with the words of the Rasul of Allah (saw):

“To whom the gates of prayer have been opened, indeed the gates of mercy have opened, and nothing more pleasing has been asked of Allah than welfare.”[7]

“Prayer is beneficial to both afflictions that have occurred and have not yet occurred. O servants of Allah, hold fast unto prayer!”[8]