External deceivers are easier to identify; beings who cannot tolerate humans for having higher values and attributes than themselves and want to pull them down from their higher human state as “the most honored of creation” to a carnal state of animalism! Beings who exploit their invisibility and take advantage of every weapon at their disposal!

Our internal deceiver, on the other hand, makes use of our lack of knowledge and discernment, our denial of our self and essence to punish us!

One pulls us away outwardly; the other buries us inwardly!

So, how can we save ourselves from this exhausting problematic situation?

The answer is simple: by READing the ‘Audhu…’ protective prayer.

“But we repeat the Audhu a hundred times a day and nothing happens!? What kind of a state is this that even the constant repetition of the Audhu seems to be useless!?”

Of course it will be useless, my friend, ‘repeating’ the audhu like a tape recorder will have absolutely no benefit to you; the situation will ‘repeat’ itself forever!

First of all… We must be aware of the existence of other entities that are not visible to us. We must be cognizant of their ability to send certain impulses to our brain to affect our thought patterns!

Everything the final Nabi and Rasul of Allah (saw) taught has pertinence to recognizing the system and its mechanism in order to protect oneself (taqwa) and to know the reality of one’s self!

The Rasul of Allah (saw) READ the system and wanted us to also be of the READers!

In fact, we must stay as far away from repeating as possible!

Since this is the case, let us READ the Audhu rather than repeating it. That is, instead of sporadically repeating the phrase “Audhu billahi minash shaytanirrajeem” thinking it’s going to shield us against something, as is traditionally done, let us understand its meaning and read it consciously!

B-illahi: in the protective forces of the Names of Allah comprising my Essence

Minash shaytanir rajeem: from impulses generated by the accursed and rejected (rajim) Satan, which as a result of preconditionings, causes our sense of illusion to perceive the existent as non-existent and the non-existent as existent, thereby making man believe he is an independent being and body outside the Names of Allah, directing man to the idea of an external deity-God in the heavens.

To put it in other words:

I seek refuge in the forces of the Names and Attributes in my essence pertaining to the One whose name is Allah, from the one who has fallen away from their reality and wants to deceive and misguide me in vengeance of the fact that I have been created with a higher capacity!

Thus, to READ the Audhu with this comprehension is the second step…

The third step, after this comprehension forms, is to know how these invisible beings (with demonic attributes) deceive and misguide us…

Rather than listing their actions, I want to delineate their general philosophy:

The primary purpose of all invisible demonic entities, since Iblis, is to guide man away from his caliphate quality and reduce him from his ‘most of honored of all creation’ (ashraf-i mahluq) state, to a base, animalistic state of existence. In doing so, they wish to verify the arguments “he is an animal created from soil” and “these humanoids/earthlings will spill blood and cause mischief on earth”! 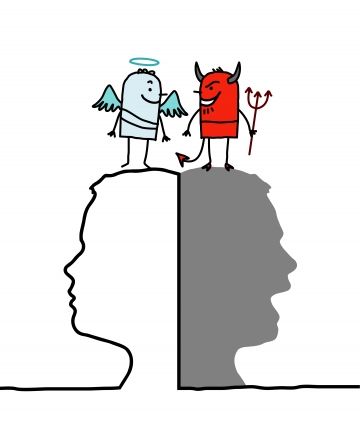 As such, their fundamental principle is to divert man’s attention to external things and prevent him from turning inward to his intrinsic qualities and potentials!

They continually infuse man with thoughts of corporeality, making him think he is the body, or keep him busy him with his environment to trigger and nourish egoistic tendencies in him… They delude man into deifying and worshipping an external god and manipulate him to ask for things from this phantom god, to show him his prayers and requests are unanswered, thereby leading him to deny this imaginary god, which they label ‘Allah’!

Their only aim is to prevent man from turning to his essential reality and deprive him of the qualities of the Names of Allah in his essence!

Thus, to drown a Sufi aspirant in the whirlpool of the ‘inspired self’ (nafs-i mulhima) state of consciousness is a perfect and simple solution for them!

‘Repetition’ implies evoking an external being, it entails tradition, conditioning, memorization and imitation.

‘READing’ on the other hand involves deciphering and decoding the system (sunnatullah) to understand its mechanism, and to output relevant THOUGHT and BEHAVIOUR.

This process of ‘decoding/understanding and acting’ is called ‘iqra’ in the Quran, which means to READ!

If one realizes that a particular thought that appears in his consciousness is making him turn towards an external god or object and making him addicted or dependent on this object, then he is in danger of being misguided away from his own reality.

If he becomes conscious at this point, of the ‘Audhu B-illah’ and ‘Ista’eenu B-illah’ realities and reads them with the intent of turning back to the One denoted by the name Allah in his essential reality, and seeks refuge in the forces comprising his essence, he may be saved from the manipulations of the invisible beings and their attempts to suffocate him in the dangers of the external world.

If he fails to READ, he will inevitably succumb to being an object of their entertainment, as he awaits his death while they hurl and fling him in the treacherous ocean of corporeality!

What does it mean to seek refuge in one’s essential reality?

This is revealed in the Kul Audhu prayers:

“Audhu bi Rabbil falaq”: “I seek refuge in the Rabb (reality of the Names comprising my essence) of the Falaq (the light that prevails over the darkness and brings enlightenment to me)"

“Min sharri ma khalaq”: From the evil of his creation

“Wa min sharri ghasikeen idha wakab”: From the evil of the darkness that settles in my consciousness preventing me from perceiving and comprehending…

“Wa min sharrin naffathatee fil’ukad”: From the evil of those who manipulate brainwaves to knots on a thread to make black magic…

“Audhu bi Rabbin Nas”: “I seek refuge in the Rabb (reality of the Names comprising the essence) of the Nas (mankind)”

“Malikin Nas”: The Malik (the One whose sovereignty and administration is absolute over) Nas (mankind)

“Ilahin Nas”: The reality of Uluhiyya that resides within the essence of every human, with which he subsists his existence, and mistakenly thinks this state pertains to a god outside of himself!

“Min sharril waswasil hannas”: From the evil of the whisperer that covertly pervades then retreats, and reduces man to corporeality

In short, by reading these protection prayers we are seeking refuge in the forces of the Names in our essential reality and their ability to become manifest, from all things that are dark (things we don’t perceive and understand) and from the evil of those who are involved in black magic (and who manipulate our brainwaves in this cause) and the negative energy of those who are envious…

I seek refuge in the dimension of ‘B’ Rububiyyah of my essence, which is also what forms the reality of all humans, thus, this act of seeking refuge on an individual level automatically takes effect at the level of humanity! I also seek refuge in the dimension of Malikiyyah, which rules over every individual consciousness at all instances! I also seek refuge in the Ilah, the One who created man with His Names and attributes… From those who deviously and slyly induce whisperings in my consciousness, which cause me to deny the Reality and make me restrict my existence to this flesh-bone body, causing me to live a carnal life driven to please the animalistic desires of my body!

Let us contemplate on these interpretations now… Let us try to understand them!

The absolute truth is this: